THE SAN JUAN RIVER TO ICJ FOR THE THIRD TIME: AN UNPRECEDENTED SITUATION 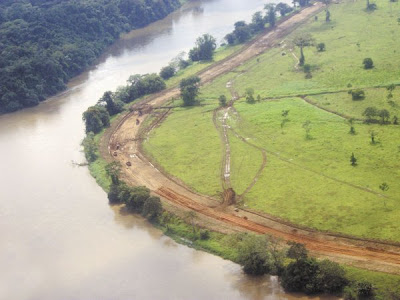 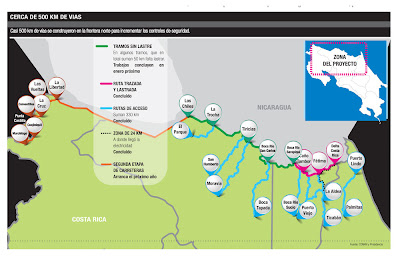 Picture from "EL Ecocatòlico",Feb 10, 2012 (Costa Rica) and map from "La República", december 20, 2011 (Costa Rica) of the road built by Costa Rica along San Juan river (called initially "carretera", and after "via", "calle", and finally "camino", "camino rústico" and "trocha fronteriza" by officials of Costa Rica) (1) .

On January 26, 2012 the International Court of Justice(ICJ) fixed time limits for the filling of initial pleadings for Nicaragua and Costa Rica in a new case involving the two riparian States of San Juan River.

The ICJ officially called this new case, filed by Nicaragua last December 22 (see the text of application), as related to “the construction of a road in Costa Rica along the San Juan River”. It has to be reminded that the other recent case brought by Costa Rica in november 2010 (see text of application) and related to the dredging of San Juan River and the illegal occupation of Costa Rican territory by Nicaragua was strangely entitled by ICJ as referring to "Certain activities carried out by Nicaragua in the border area".

Argentina-Uruguay precedent case: Many of the arguments presented by both countries since October 2010, when Nicaragua began dredging the river, and again at the end of 2011, when Costa Rica began the construction of the road, remind legal arguments of another case between two Latin American countries: Argentina and Uruguay. Argentina blamed its neighboring country for cellulose plants and the seriorus risks to affect the Uruguay River along the two countries border. The Court April 2010 ruling in that case generated criticism, particularly regarding the extremely cautious position of judges and the serious limitations of the court in dealing with cases of a technical nature, as is often the case with environmental disputes. Despite these criticisms, the ICJ, in an attempt to fine-tune environmental principles, ruled for the first time that " A State is thus obliged to use all the means at its disposal in order to avoid activities which take place in its territory (...) causing significant damage to the environnement of another State " (paragraph 101).
Additionally, the court referred to states’ obligation to conduct environmental impact studies in such cases. “Moreover, due diligence, and the duty of vigilance which it implies, would not be considered to have been exercised, if a party planning works liable to affect the régime of the river orthe quality of its waters did not undertake en environmental impact assess on the potential effects of such works" (paragraph 204 of April 20, 2010 ICJ decision). Argentina and Uruguay held a presidential summit barely eight days after the court’s ruling, and later approved the creation of a joint technical body to evaluate environmental damage along their river border. These were symbolic acts that sought to harmonize, little by little, relations that had deteriorated after a long verbal spat.

Environment and San Juan river: In the case involving navigational and related rights on the Río San Juan, Costa Rica and Nicaragua briefly discussed environmental issues. Costa Rica questioned whether Nicaragua could restrict navigation rights based on environmental considerations – an issue not mentioned in the Treaty of 1858. Nicaragua held the opposite opinion.
In its decision on July 13, 2009, the court stated that “ over the course of the century and a half since the 1858 Treaty was concluded, the interests which are to be protected through regulation in the public interest may well have changed in ways that could never have been anticipated by the Parties at the time: protecting the environment is a notable example (...) Nicaragua, in adopting certain measures which have been challenged, in the Court’s opinion, is pursuing the legitimate purpose of protecting the environment.” (paragraph 89).
Given this background, the two most recent cases before the world court regarding the Río San Juan will permit the court’s 15 judges to further establish principles and rules governing countries that share river borders. Some of those principles already were established by the U.N.’s Convention on the Law of Non-Navigational Uses of International Watercourses in 1997. An article related to Crucitas mining project referred to Costa Rica general obligations as a riparian State of San Juan river (see: Crucitas desde la perspectiva internacional, La Naciòn, Feb. 21, 2009).To date, the convention has been ratified by 24 countries, but only two in Latin America have signed it: Paraguay and Venezuela (See current status of ratification)

Lack of technical information and joint evaluation: Transboundary environmental impact studies along borders increasingly constitute a useful tool, as referred, for example in Art. 14 of International Convention on Biodiversity. Costa Rica and Nicaragua have legal provisions referred to it in their respective legislation (Costa Rica: Art. 7º of Reglamento General sobre Procedimientos de EIA, Executive Decree 31849 of 2004, Nicaragua: Art. 13 of Ley General del Medio Ambiente y los Recursos Naturales and Art. 4 of Decree 76-2006 on the System of Impact Assesment Studies (EIA). An article related to the dredging of San Juan River explainet that "The tool exists, and both States have it incorporated in their respective legislation to use it and to avoid posibles disputes and tensions" (Article: Dragado, impacto transfronterizo y consistencia jurídica, Diario La Extra, 2 de octubre del 2010).

Historical record: With Nicaragua’s most recent complaint before ICJ about Costa Rica’s road parallel to the river, the total number of cases filed by the two countries at ICJ is three in a little more than six years. This is an unprecedented number at The Hague in such a short period of time. Despite the fact that many basic texts of international law mention that the very first international organizations were precisely joint river commission related to international rivers (Commission for the Navigation on the Rhin river created in 1831 and Danube International Commission of 1856) (2) , the ICJ seems to be the only way that Costa Rica and Nicaragua have in mind to resolve the grave tensions between them, caused by activities along the Río San Juan. Statements by Costa Rica’s foreign minister in which he announced plans to spend $2 million annually on the issue related to dreddging case reveal a significant long-term financial cost for both countries (3) , caused by this completely unprecedented situation in the history of international justice.

Note (3): a "normal" period of time for a contentious case at ICJ is 4 to 5 years as a minimun. But much more if procedural incidents and exceptions are used by the Parties: the case brought by Nicaragua against Colombia (maritime delimitation) in December 2001 is, for example, still pending after 10 years before ICJ.


Part of this note has been published in the Tico Times, edition of Feb 24, 2012, "The Rio San Juan and The Hague", and in La Nación (edition of Sunday 4th March, 2012)
Publicado por Curso de Derecho Internacional. Costa Rica en 9:37 No hay comentarios: