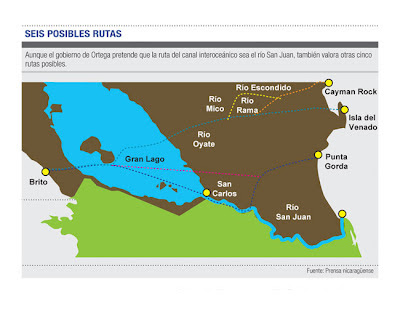 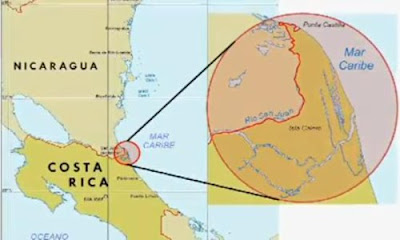 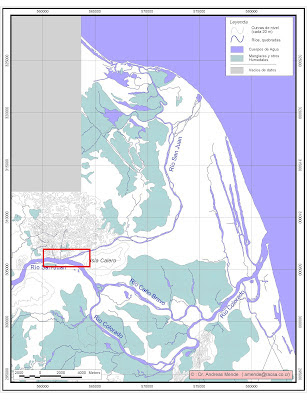 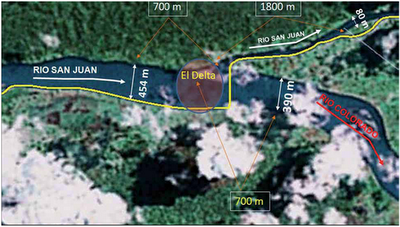 A press release indicated yesterday that China officials interceded to obtain from Nicaragua the exclusion of San Juan river as a route for a future interoceanic channel, following an official position made by Costa Rica to China´s authorities (see press release in Spanish, La Nación).

San Juan river: a general overview: San Juan river runs approximately 205 kilometres from the Lake Nicaragua (also known as "Lago Cocibolca") to the Caribbean Sea. During the colonial period, it was also referred to as "Rio Desaguadero", because it constitutes the only natural outlet of Lake Nicaragua to the sea (the term "Desaguadero" means "outlet" in Spanish). It flows within the largest river basin in Central American. The geographical extension of the basin of San Juan River can be defined by Lake Nicaragua (8000 km2), the San Juan River system, the basins of the Indio and Maiz Rivers in Nicaragua on the north and the Costa Rican river basin system on the south, totalizing approximatively 38.500 km2. In less than 7 years (2005-2011), recurrent problems related to San Juan river beetween Costa Rica and Nicaragua have had an unexpected result: both riparians of San Juan have decided to present 3 different cases before ICJ in The Hague.

China in the region: Costa Rica is the only country in Central America having broken relations with Taiwan and having established diplomatic relations with China in june 2007. Wikileaks diplomatic cables revealed that this political decision was a complete surprise for members of the US Embassy based in San José in june 2007 (usually a group of persons well informed) as well as for Taiwan officials in Taipe (see press release, in Spanish, La Nación). We also read in one of the diplomatica correspondance that Costa Rica ´s move was linked to a possible move of Nicaragua: "On the Costa Rican side, Stagno,s Chief of Staff, Antonio Alarcon, was dispatched to Beijing to oversee the embassy opening there (although we understand he will not remain as ambassador). A confident-sounding Stagno told Ambassador Langdale on June 11 that the Arias administration expected the controversy about the sudden switch in relations to die down in a few weeks. "The decision has been made," he stressed. Stagno asserted that the recognition timing was partly driven by regional dynamics. The GOCR was under the impression that other Central American countries, including Nicaragua, were considering recognizing China. Costa Rica did not want to be in the position of "following Nicaragua" on this issue. This was "not just about trade," According to Stagno " (Bruno Stagno was Minister of Foreign Affairs of Costa Rica (2006-2010). See Wikileaks cable). As written by specialists some years ago "Costa Rica has now emerged as the stress test for both local and regional neighbors in evaluating the impact of China’s expanding partnerships in this distant but vital part of the world" (see article: China’s Strategy toward Central America: The Costa Rican Nexus).

Recent decision on interoceanic channel: As noted one year ago, different options for the inter-oceanic channel were under study since 2006. Last July 2012, Nicaragua Congress adopted a law establishing the High Authority of the future Canal (see full text in Spanish). Recently, Nicaragua gave formal guarantees to Costa Rica that the channel will not use San Juan River. However, in Nicaragua that time, some doubts are still persisting among many political and economical sectors, including environmental specialists: with around 286 kilometers long, 24 meters deep and 20 meters large (the exact localisation of the channel remains unclear) this channel will constitute a megaproject with possible severe environmental impact for San Juan basin in Nicaragua (see also the note in The Guardian, "Nicaragua gives Chinese firm contract to build alternative to Panama Canal".

Possible environmental effects unknown: Despite the excellent political relations existing beetween officials of Costa Rica and China (China´s President visited Costa Rica during 3 days last June 1-2-3 and signed many agreements, including a credit of US$ 900 millions for the construction of an oil refinery), Costa Rica shouldn´t be so sure that the simple “removal” of San Juan river´s option is a guarantee of no effects of this project: as said before, San Juan river is approximatively 206 kilometers long, and its depth is variable, but does not exceed a few meters. Former name during the colonial period of San Juan river was “Rio Desaguadero” of the Lake Nicaragua, and there is no technical information available on the proportion existing beetween this vey natural “oultet” (the San Juan river) and the new artificial one (the channel planned by Nicaragua and China´s firm). The conclusions of a project called Pro Cuenca San Juan elaborated by the two riparian States under the auspices of the Organization of American States (OAS) and United Nations Environment Programme (UNEP)in 1996 deserve to be read again, mainly chapters related to the different kind of vulnerabilities of the San Juan basin shared by Costa Rica and Nicaragua. On another hand, the Lake of Nicaragua of 8.000 km2 has possible relations with acuifers located in Nicargua but also with transboundary acuifers shared by Costa Rica and Nicaragua: a chart related to the possible hidrogeologic basin between Costa Rica and Nicaragua can help to illustrate this unexplored issue (in red color the localisation of Las Crucitas gold mining project suspended by costarican tribunals in november 2010 (see our article: Of Crosses, Crusades and Crucitas). Chart elaborated by Allan Astorga, geologist of the University of Costa Rica (UCR): 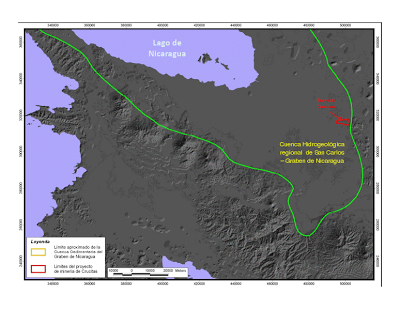 Taking into consideration the fact that climate change impacts in Central America are and will be more severe than in any other region, mainly concerning rain seasons variations, both riparians of San Juan river should find an agreement in order to guarantee what was called in Birsbarne Declaration of 2007 “environmental flow” for San Juan River. How to secure environmental flows for San Juan river is probably the key issue. Brisbarne Declaration indicated that "Environmental flow needs are currently unknown for the vast majority of freshwater and estuarine ecosystems. Scientifically credible methodologies quantify the variable – not just minimum – flows needed for each water body by explicitly linking environmental flows to specific ecological functions and social values. Recent advances enable rapid, region-wide, scientifically credible environmental flow assessments". 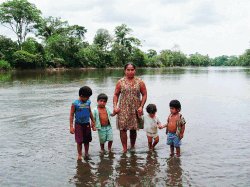 In order to have (also) a much better idea of the complexity of the concept of "environmental flow", we refer to the report "Environmental Flow Assesments for rivers: manual for the building block methodology, 2008".

Spanish version of this short note whas been edited as an article in Costa Rica, available at Costa Rica Hoy edition of June 15, 2013 as well as at elpais.cr, June 15, 2013 and Informatico, June 18, 2013.
Posted by Curso de Derecho Internacional. Costa Rica at 12:23