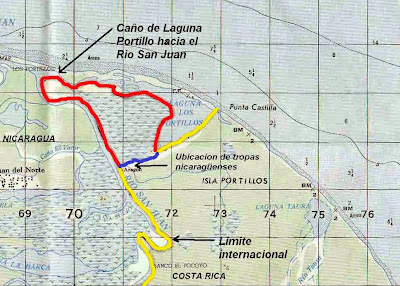 Figure indicating the localisation of caño "Google" or Caño "Pastora" excavated by Nicaragua in Isla Portillos in October 2010 in blue colour. In red colour, the "disputed territory" as defined by ICJ in March 2011 (Chart elaborated by Dr. Allan Astorga).

Last December 18, Costa Rica announced (see press note) that it has requested to International Police Organization INTERPOL an arrest warrant against Eden Pastora and that it had been successfully accepted by INTERPOL. Eden Pastora is the top official of Nicaragua in charge of the dredging of San Juan river in its terminal sector (dredging operation initiated by Nicaragua in October 2010) . A note of December 17, 2013 refers to INTERPOL acceptance (see declarations of Vice Minister Celso Gamboa from Costa Rica).

It must be recalled that in December 2010, national office of Prosecutor of Pococi opened a criminal case against Pastora for usurpation of public property and breach of environmental law (Forestry Act), following the environmental damage caused in Isla Portillos. As known, INTERPOL is a political neutral body with 190 member States, based since 1982 in Lyon (France) with a quite peculiar structure if compared with other international organizations from the perspective of public international law (Note 1). Costa Rica is member of INTERPOL since 1954, and Nicaragua since 1985. It goes without saying that Article 3 of INTERPOL’s Constitution explicitly refers to forbidding INTERPOL from "engaging in matters of political, military, religious and racial character".

Nicaragua, on December 23 2013 (see press note) sent an official letter to INTERPOL requesting the order be removed, arguing, among others reasons, that Pastora was acting in “performance of his duties” as an employee of the Government of Nicaragua, the dredging work was done on Nicaraguayan territory and that no damage was caused to Costa Rica. It also argued that the sovereignty on Isla Portillos region is being analyzed by the International Court of Justice (ICJ), which has declared itself in March 2011 in its Order on Provisionnal Measures that Isla Portillos must be considered as a "disputed territory " beetween the two San Juan river riparian States (see ICJ pres release of March 8, 2011).

On January 3, Interpol’s General Secretariat informed the Organismo de Investigación Judicial (OIJ) – from Costa Rica’s judicial police – that it had cancelled the request (see press note). Despite the international arrest warrant requested by Costa Rica against Edén Pastora was lifted, following the request of Nicaragua, the OIJ confirmed that Pastora is still a wanted man in Costa Rica (Note 2).

Sea Shepherd captain and founder Paul Watson has been arrested in Germany in 2012 due to an INTERPOL warrant arrest ordered by Costa Rica. This arrest provoked an embarassing political and diplomatical situation for Costa Rica authorities. In July 2012, top diplomatic official met him in Stuttgart personnally in order to try to find a solution if eventually the deportation to Costa Rica was effective, given him, among others guarantees, some insurances not to be extradited to third countries extremely interested in having him under their respective jurisdiction. In October 2013, a note of Tico Times indicated that red alert ordered by Costa Rica against him has been dropped. One montn after another note of Tico Times said that: " A spokeswoman for Costa Rica’s judicial branch confirmed on Wednesday the request had been sent via diplomatic channels to the U.S. government. The U.S. has not yet formally responded to the request, and Watson has not been arrested."