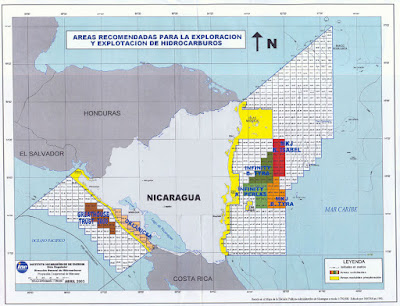 Official map distributed by Nicaragua in 2003 offering blocks for oil exploration in both oceans, taken from note published by CRHoy in 2013

Last July 13th, public hearings in the joined cases concerning Maritime Delimitation in the Caribbean Sea and the Pacific Ocean (Costa Rica v. Nicaragua) and Land Boundary in the Northern Part of Isla Portillos (Costa Rica v. Nicaragua) have concluded. It must be recalled that last January 2017, Costa Rica filed a request to ICJ against Nicaragua due to the presence of a Nicaraguayan military carp in the beach located near the Portillos Lagoon, arguing a violation of its sovereignty. Nicaragua indicated that this beach belongs to its own territory. Official maps of Costa Rica, at least until December 2015, showed that this beach does not belong to its territory. 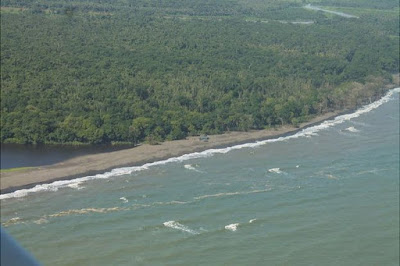 Picture of the presence of soldiers of Nicaragua on the beach of Portillos (the carp is a blue point in the middle of the picture), taken from this article of Tico Times, of January 2017. 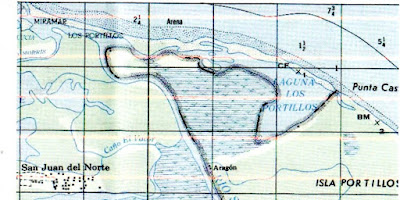 The joining of these two cases asked by Costa Rica has been objected by Nicaragua. It can be read in ICJ´s order of February 2017 that:

"13. Costa Rica stated that it maintained its request for a joinder of the proceedings, observing in particular that it was necessary for the Court to settle all of the questions at issue between the Parties concerning the northern part of Isla Portillos. It was therefore in favour of short time-limits being granted for the filing of written pleadings in the new proceedings, so as to allow the Court to deal with both cases in its current composition. To that end, Costa Rica proposed that each Party be given a time-limit of 45 days, or a maximum of two months, in which to prepare its written pleading. It further suggested that the experts’ report in the case concerning Maritime Delimitation should not be communicated to the Parties until after the filing of the written pleadings in the case concerning Isla Portillos.

14. For its part, Nicaragua stated that in its opinion the conclusions reached by the experts in the case concerning Maritime Delimitation would be essential to the case concerning Isla Portillos, and that therefore it would not be logical for Costa Rica to file its Memorial in the second case before reading the said report. Nicaragua added that it would not be able to comment on the appropriateness of a joinder or determine the time needed to prepare its Counter-Memorial until it was in possession of the experts’ report and Costa Rica’s Memorial. It was currently of the view that, in any event, each Party should be given a time-limit of six months to prepare its written pleading".

Map of the blocks explored by Statoil in Pacific Ocean, taken from this official press release of Statoil of May 2015

The Court heard during two weeks both States and will now begin its internal deliberation (also known as "délibéré" that can take a few months or more than one year, as experienced by Peru and Chile (13 months) in 2014 or Honduras and El Salvador in 1992 (15 months taken by the Ad Hoc Chamber of ICJ).

Costa Rica opted to intercalate after Agent´s preliminary presentation the oral arguments presented by its own diplomats, a singular practice that seems to be very unique at ICJ. Usually, at The Hague, after Agent´s words, international legal counsels take the floor until the conclusions and final submissions read by the Agent again. This costarican way to litigate also took place during public hearings of Costa Rica against Nicaragua in 2015, 2013, 2011 and in 2010 (hearings on the intervention of Costa Rica in Nicaragua v. Colombia maritime dispute). Another unusual aspect observed is that the Ministry of Foreign Affairs of Costa Rica headed personnally Costa Rica´s delegation at the beginning of public hearings, as did his predecessors in 2011 and in 2015.

The list of written documents concerning the first case (Memorial of Costa Rica, Counter memorial of Nicaragua) as well as record of verbatims since July 3rd (in their original language, English and French) are available in the following lines. For a analysis in order to try to understand why Costa Rica has presented 3 requests against Nicaragua between 2010 and 2107, see our article (in Spanich) available here and published on different legal websites like DIpúblico (Argentina) and Ius360 (Peru).

How much do States spend in a litigation procedure of many years (four as a minimum) at ICJ? Usually, States are extremely discrete on this particular issue and legal literature too. In 1985, it was written that Canada and United States spent more than US$ 14 millions in the case of Gulf of Maine (see Robinson D.R., Colson D.A. and Rashkow B.C., 'Some Perspectives on Adjudicating before the World Court: The Gulf of Maine Case' (1985) 79 AJIL, 578–597, p. 588).

However some interesting recent data can be found in a few cases, at least in Latin America. For example, Nicaragua´s Contraloría General de la República indicated a total mount of 6.169.029 US$ to respond to the only case presented at that time by Costa Rica (May 2011): see note of El Nuevo Diario. Uruguay registered a final cost of 8.070.891 US$ in the case against Argentina (2006-2010), available in this note of July 2010 edited in AnalisisDigital. Chile recognized, after a judicial order of a national tribunal, having spent more than US$ 20,3 millions to respond to Peru´s request at ICJ in 2013 (see note published in Milenio). A decision of the Chilean Supreme Court of January 2014 (see text) reviewed the prior decision forcing the Executive to make public this data, showing the reluctance of chilean highest judicial authorities to transparency, at least in this particular case. It must be noted that Colombia, after the withdrawal of Ecuador´s request presented in 2008 at ICJ, agreed with Ecuador in 2013 to deposit US$ 15 millions that include the costs assumed by Ecuador during the litigation, among others costs (see point 9 of the bilteral agreement of September 9, 2013)

Documents presented by Costa Rica and Nicaragua before and during public hearings that took place from July 3rd to 13th, 2017

I. Memorial and Counter Memorial

Record of July 10 (afternoon), including final submissions at pp. 25-27