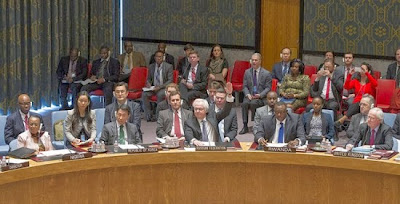 Veto of Russia´s representantive during the meeting of March 15, 2014 at the United Nations Security Council (picture taken from press note).

The General Assembly adopted last March 27 a resolution on Ukraine’s territorial integrity without mentionning Russia. The drat resolution has been presented by Canada, Costa Rica, Germany, Lithuania, Poland and Ukraine. The text adopted underscores the invalidity of the 16 March referendum held in Crimea.

Saint Vincent and The Grenadines representative explained the abstention of CARICOM Members States in the following terms: “Secessionist referenda, and referenda on sovereignty by ethnically or historically distinct inhabitants of a particular geographic space, should not be manipulated or selectively accepted by would-be imperial powers” and added in the same interview that "We note the sad irony that those most supportive of Kosovo’s unilateral declaration of independence now reject that of Crimea; while those with the strongest arguments against the ICJ (International Court of Justice) decision on the legality of the Kosovar UDI now cite it approvingly". Finally, for Saint Vincent and Grenadines representative, "those who have advised Argentina to take “careful note” of views of 99 per cent of the residents in the Islas Malvinas were now branding as invalid the opinions of 97 per cent of the residents of Crimea" (see full interview of The Gleaner, Jamaica). Reference to Kosovo 2008 declaration of independence in official statements listen in New York a few days ago must no be a surprise and we refer to a modest article on Crimea from legal perspective, including ICJ decision of 2010 on Kosovo (article in Spanish published in Tribuglobal last March 19, 2014): before ICJ proceedings, Spain and Latin American States that presented their legal opinions to ICJ judges(available here) were totally coincident on the illegality of Kosovo´s unilateral declaration of independance of February 2008. None of the States of Latin America that recognized Kosovo independence in 2008 sent their opinions to ICJ judges. 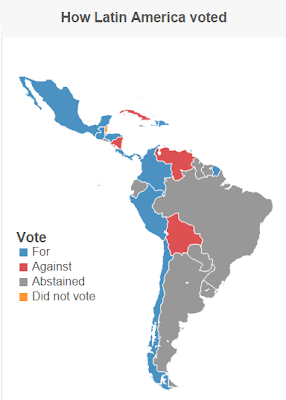 Prevention of armed conflict: strengthening the role of mediation in the peaceful settlement of disputes, conflict prevention and resolution

Reaffirming the paramount importance of the Charter of the United Nations in the promotion of the rule of law among nations,

Recalling also its resolution 2625 (XXV) of 24 October 1970, in which it approved the Declaration on Principles of International Law concerning Friendly Relations and Cooperation among States in accordance with the Charter of the United Nations, and reaffirming the principles contained therein that the territory of a State shall not be the object of acquisition by another State resulting from the threat or use of force, and that any attempt aimed at the partial or total disruption of the national unity and territorial integrity of a State or country or of its political independence is incompatible with the purposes and principles of the Charter,

Recalling further the Final Act of the Conference on Security and Cooperation in Europe, signed in Helsinki on 1 August 1975, the Memorandum on Security Assurances in Connection with Ukraine’s Accession to the Treaty on the Non-Proliferation of Nuclear Weapons, of 5 December 1994 (Budapest Memorandum), the Treaty on Friendship, Cooperation and Partnership between Ukraine and the Russian Federation of 31 May 1997, and the Alma-Ata Declaration of 21 December 1991,

Stressing the importance of maintaining the inclusive political dialogue in Ukraine that reflects the diversity of its society and includes representation from all parts of Ukraine,

Welcoming the continued efforts by the Secretary-General and the Organization for Security and Cooperation in Europe and other international and regional organizations to support de-escalation of the situation with respect to Ukraine,

Noting that the referendum held in the Autonomous Republic of Crimea and the city of Sevastopol on 16 March 2014 was not authorized by Ukraine,

1. Affirms its commitment to the sovereignty, political independence, unity and territorial integrity of Ukraine within its internationally recognized borders;

2. Calls upon all States to desist and refrain from actions aimed at the partial or total disruption of the national unity and territorial integrity of Ukraine, including any attempts to modify Ukraine’s borders through the threat or use of force or other unlawful means;

3. Urges all parties to pursue immediately the peaceful resolution of the situation with respect to Ukraine through direct political dialogue, to exercise restraint, to refrain from unilateral actions and inflammatory rhetoric that may increase tensions, and to engage fully with international mediation efforts;

4. Welcomes the efforts of the United Nations, the Organization for Security and Cooperation in Europe and other international and regional organizations to assist Ukraine in protecting the rights of all persons in Ukraine, including the rights of persons belonging to minorities;

6. Calls upon all States, international organizations and specialized agencies not to recognize any alteration of the status of the Autonomous Republic of Crimea and the city of Sevastopol on the basis of the above-mentioned referendum and to refrain from any action or dealing that might be interpreted as recognizing any such altered status.