The Recent Suspension of Russia from the UN Human Rights Council. A Few Reflections

The recent suspension of Russia from the UN Human Rights Council: a few reflections

The first operative paragraph (OP1 in United Nations´s jargon) of this resolution states that the General Assembly:

"1. Decides to suspend the rights of membership in the Human Rights Council of the Russian Federation".

In its intervention, among many others statements given by States that have supported this suspension, French delegate stated (see its declaration) that:

On behalf of European Union (EU) Member States, its representative declared (see its statement) that:

"The scale and gravity of Russia’s violations of international human rights law and international humanitarian law, as well as the violations of the UN Charter and the territorial integrity and sovereignty of another State, call for strong united international response. Russia is responsible for a horrific number of casualties, suffering, forced displacements, and relentlessly Russian armed forced have been shelling cities, schools, hospitals for more than one month now.The Russian authorities are responsible for the crimes committed while they had effective control of the area. They are subject to the international law of occupation".

On the contrary, Cuban delegate, who voted against this resolution on the suspension of Russia, declared (see his statement):

We refer to this official UN press release on this vote,  as well as its French version.

The official version of the resolution A/RES/ES-11/3 adopted can be found at the end of this article, in English, French and Russian.

As it is well known, the Human Rights Council is the highest human rights body within the current United Nations structure, made up of States elected by the United Nations General Assembly itself.

From the Latin American region, we have had the opportunity to analyse the recent election of Argentina, Honduras and Paraguay on behalf of Latin America and the Caribbean, which took place in October 2021 (see our brief note published in Spanish); that of Bolivia, Cuba and Mexico in 2020 (see note); as well as that of Brazil and Venezuela in 2019 (see note), an election in which Costa Rica participated with a last minute candidacy that finally failed (Note 1). The eight aforementioned States elected in 2019 constitute the current representatives of Latin America in this intergovernmental body, which is composed of 47 Member States.

It should be recalled that the current Human Rights Council, created by resolution A/RES/60/251 of April 2006 (see text), replaced the Commission on Human Rights, which functioned from 1946 until March 2006: the Commission was composed of 53 Member States.

The suspension of a State from membership at the Human Rights Council following a decision coming from the General Assembly has only one unique precedent: in 2011, Libya was subject to a very similar resolution suspending its membership (see text of resolution A/RES/65/265 of March 2011). This resolution on Libya has been adopted in 2011 without a vote at the UN General Assembly.

Another recent absence at the Human Rights Council occurred in June 2018, when United States opted to withdraw from the Human Rights Council voluntarily, as a sign of solidarity with its staunch Israeli ally: Israel's highest authorities welcomed this unprecedented gesture by their unconditional American ally (see Times of Israel´s article of 20/06/2018) (Note 2). In 2014, a very similar situation in which United States voted against (and totally alone) the establishment of a mechanism to investigate Israel´s military actions in Gaza did not provoke such withdrawal from United States (Note 3).

The vote recorded on 7 April: some details

The draft of future resolution A/RES/ES-11/3  adopted on 7 April in New York has been presented on 6 April by 57 States, including Colombia on the Latin American side, followed later by Costa Rica and Guatemala (Note 4): the voting record shows that the resolution has been adopted with 93 votes in favour, 24 against, 58 abstentions and 18 States whose delegates opted for the always peculiar option of "No Show" (see details of the vote in this UN link).

The votes in favour included those of Hungary (one of the proposing State) and Serbia, States usually reluctant to expose Russia in this type of exercise at the universal level, as well as the votes of Israel and Turkey, States that are trying to offer their good offices in the crisis between Russia and Ukraine.

Among those who voted against the resolution suspending Russia from the Human Rights Council were Bolivia, Cuba and Nicaragua in the American hemisphere; as well as, in Africa, Algeria, Burundi, Congo, Eritrea, Ethiopia, Gabon, Mali and Zimbabwe, among others; and in Asia, China, Iran and Vietnam. 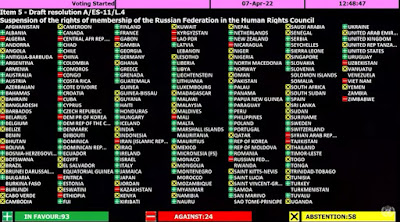 Recalling its resolution 60/251 of 15 March 2006, in particular paragraph 8, which states that the General Assembly may suspend the rights of membership in the Human Rights Council of a member of the Council that commits gross and systematic violations of human rights,

Taking note of Human Rights Council resolution 49/1 of 4 March 2022, in particular the grave concern of the Council regarding reports of gross and systematic violations and abuses of human rights and violations of international humanitarian law committed by the Russian Federation during its aggression against Ukraine,

1. Decides to suspend the rights of membership in the Human Rights Council of the Russian Federation;

2. Also decides to review the matter, as appropriate;

A version of this very same text is available here in Spanish and has been posted in different sites and online newspapers.