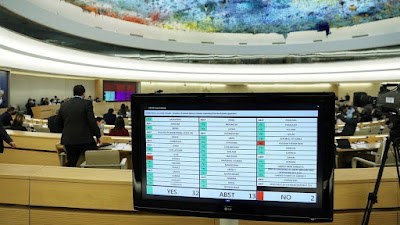 Resolution adopted by the Human Rights Council on 4 March 2022

49/1.      Situation of human rights in Ukraine stemming from the Russian aggression

Guided by the principles and purposes of the Charter of the United Nations,

Welcoming the adoption of the resolution on Aggression against Ukraine at the UN General Assembly on March 2, 2022,

Reaffirming its strong commitment to the sovereignty, political independence, territorial integrity and unity of Ukraine within its internationally recognized borders, extending to its territorial waters, and reaffirming also that all peoples are entitled to freely determine, without external interference, their political status and to pursue their economic, social and cultural development, in accordance with international law,

Strongly condemning the aggression against Ukraine by the Russian Federation,

Recalling in this regard the reports by the UN Secretary General and the Office of the UN High Commissioner for Human Rights based on the work of the UN Human Rights Monitoring Mission in Ukraine (HRMMU) established in 2014,

Concerned about increasing reports of civilian casualties, including children, forced displacement, including more than 660,000 refugees, and at damage to and destruction of residential areas, schools, cultural sites, and critical civilian infrastructure, including hospitals and civilian water, sanitation, and fuel supplies caused by Russian bombing and shelling in populated areas,

Recalling that the States members of the Human Rights Council are required to uphold the highest standards in the promotion and protection of human rights,

Deploring the suffering of the people in Ukraine and reaffirming its profound solidarity with them, while stressing the importance of providing them with proper support and assistance,

Concerned by the humanitarian needs of all those fleeing from or displaced by the military hostilities,

Reaffirming the importance of the full, equal and meaningful participation of women in planning and decision-making with regard to mediation, confidence-building, conflict prevention and resolution, and of their involvement in all efforts to maintain and promote peace and security, and the need to prevent and redress human rights violations and abuses, such as all forms of violence against women and girls, especially sexual and gender-based violence,

Emphasizing the important role played by the Office of the United Nations High Commissioner for Human Rights and the human rights monitoring mission in Ukraine in contributing to an objective appraisal of the situation of human rights in Ukraine,

Reaffirming that the right to freedom of opinion and expression, both online and offline, is a human right guaranteed to all, reiterating in this regard the important role of free and independent media and non-governmental organizations, and condemning any attack against journalists, media outlets, media workers, and human rights defenders,

Expressing concern at the spread of disinformation, which can be designed and implemented so as to mislead and to violate and to abuse human rights, including privacy and the freedom of individuals to seek, receive and impart information,

Noting the decision by the prosecutor of the International Criminal Court to proceed with opening an investigation into the situation in Ukraine, as rapidly as possible,

Noting also the role of the International Court of Justice in settling, in accordance with international law, legal disputes submitted to it by States,

1.      Condemns in the strongest possible terms the human rights violations and abuses and violations of international humanitarian law resulting from the Russian Federation’s aggression against Ukraine;

1bis. Reaffirms its strong commitment to the sovereignty, political independence, unity and territorial integrity of Ukraine within its internationally recognized borders, extending to its territorial waters;

2.      Calls upon the Russian Federation to immediately end its human rights violations and abuses and violations of international humanitarian law in Ukraine, and calls for the strict observance of all human rights and fundamental freedoms, and for the protection of civilians and critical civilian infrastructure in Ukraine;

3.      Calls for the swift and verifiable withdrawal of Russian Federation troops and Russian-backed armed groups from the entire territory of Ukraine, within its internationally recognized borders, as well as its territorial waters, in order to prevent further violations and abuses of human rights and violations of international humanitarian law in the country, and stresses the urgent need for the immediate cessation of military hostilities against Ukraine;

4.      Urges immediate, safe and unhindered humanitarian access, including across conflict lines, to ensure that humanitarian assistance reaches all those in need, particularly those in vulnerable situations, and to respect the independence and impartiality of humanitarian agencies and ensure the protection of humanitarian personnel and medical personnel exclusively engaged in medical duties;

5.      Expresses grave concern at the documented harm to the enjoyment of many human rights, including the rights to life, education, and the highest attainable standard of physical and mental health, caused by Russian shelling and bombing in populated areas;

6.      Stresses the importance of maintaining free, open, interoperable, reliable and secure access to the Internet, and condemns unequivocally any measures that prevent or disrupt an individual’s ability to receive or impart information online or offline, including partial or complete Internet shutdowns;

6bis. Stresses that all those fleeing from the conflict in Ukraine should be protected without discrimination, including on the basis of racial, national, and ethnic identity;

7.      Encourages relevant thematic special procedure mandate holders, within their respective mandates, to pay particular attention to the situation of human rights in Ukraine;

9.      Decides to urgently establish an independent international commission of inquiry, constituted by three human rights experts, to be appointed by the President of the Human Rights Council for an initial duration of one year, complementing, consolidating, and building upon the work of the HRMMU, and in close coordination with the HRMMU and OHCHR, with the following mandate:

(b)    To collect, consolidate and analyse evidence of such violations and abuses, including their gender dimension, and to systematically record and preserve all information, documentation and evidence, including interviews, witness testimony and forensic material, consistent with international law standards, in view of any future legal proceedings;

(c)    To document and verify relevant information and evidence, including through field engagement, and to cooperate with judicial and other entities, as appropriate;

(d)    To identify, where possible, those individuals and entities responsible for violations or abuses of human rights or violations of international humanitarian law, or other related crimes, in Ukraine, with a view to ensuring that those responsible are held accountable;

(e)    To make recommendations, in particular on accountability measures, all with a view to ending impunity and ensuring accountability, including, as appropriate, individual criminal responsibility, and access to justice for victims;

10.   Requests the immediate operationalization of the mandate, and requests the Secretary-General to provide all the resources necessary to enable the commission of inquiry to carry out its mandate and the resources and expertise necessary to enable the Office of the United Nations High Commissioner for Human Rights to provide such administrative, technical and logistical support as is required to implement the provisions of the present resolution, in particular in the areas of fact-finding, legal analysis and evidence-collection;

11.   Calls upon all relevant parties and States, and encourages civil society, the media and other relevant stakeholders, to cooperate fully with the commission of inquiry to allow it to effectively fulfil its mandate, and to provide it with relevant information or documentation they may possess or come to possess, as appropriate;

12.   Calls upon the relevant organs, bodies and agencies of the United Nations system to cooperate fully with the commission of inquiry and to respond promptly to any request made by it, including with regard to access to relevant information and documentation;

13.   Decides to remain actively seized of the matter.

[Adopted by a recorded vote of 32 to 2, with 13 abstentions. The voting was as follows: